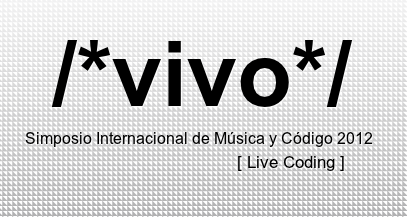 The /* vivo */ international symposium is now underway in Mexico City, featuring workshops, talks and performances by local and international artists.  Over the last two yeras Mexico City has earned a big reputation for its live coding culture, possibly the biggest and most vibrant in the world – the challenge is set!

This is the third international live coding event.  The first was Changing Grammars in Hamburg 2004, DE, then LOSS Livecode in Sheffield, UK 2007, and now Mexico City in 2012.  Things are speeding up though, with the live.code.festival in Karlsruhe, DE in April 2013 – note the proposals for talks, performances etc closes for that in two days time!