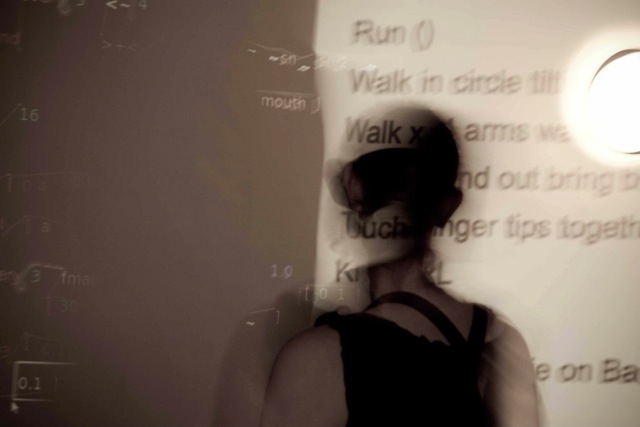 There’s a kinaesthetic fringe growing around the usual audio/visual TOPLAP activities, where people live code other people, or even themselves, rather than computers. Nick Collins was perhaps the first to view choreography from the live coding perspective, detailed in his 2011 paper Live Coding of Consequence. Kate Sicchio has developed her “choreographic hacks” in parallel, and her “Choreography Hack v.03” shown below demonstrates the dangers of trying to live code people:

Kate has now written a Hacking Choreography manifesto, which confronts the TOPLAP draft manifesto with a draft port to choreography. As you might expect from the above, it asserts agency: “The dancer always has the ability to change the program, ignore the program, or subvert the program.”

You can catch Kate (and the present writer) talking and performing at the Thursday Club, C4CC, Kings Cross London this Thursday 11th July 2013.

There’s a few more examples of live coding without computers in the TOPLAP wiki.