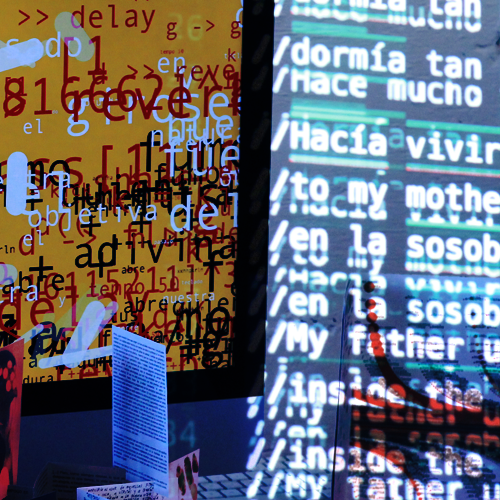 Within the framework of ELO 2018 and thanks to the support of the Digital Writings Laboratory TOPO, the Latin American artists Rodrigo Velasco and the collective Andamio,  have made a one-week artistic residency in TOPO including a public presentation of the results yesterday through a live installation.

In a second step, the artists will offer media performances in the ELO evenings. Rodrigo Velasco (yecto) will perform ‘alphautre’ a live coding audiovisual set of improvised poetic associations through – ‘ese2‘ (Processing + TidalCycles) –  on Thursday, August 16th, at the Black Box, Concordia University in a free performance evening with seven other artists from here and abroad. Andamio, composed of three Mexican artists and one Argentinian will be premiering a performance, Mother, including live coding visuals through Hydra and CineVivo as part of the closing banquet of ELO, Friday, August 17 at the Lion d’Or.

This 2018 edition of ELO is organized by the research lab NT2 (New technologies, new textualities – UQAM) with which TOPO has collaborated for several years. Under the heading Mind the Gap!, this bilingual event, with English and French components, focuses on the current trends in electronic literature in Quebec and elsewhere in the world, in the broader context of the new digital culture.