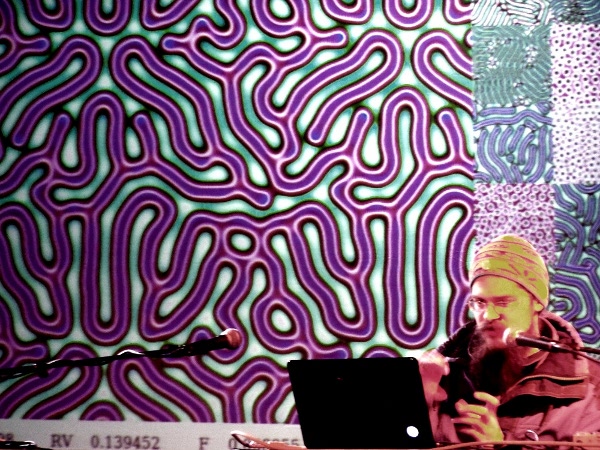 First the context — a no-input mixing board is a mixer that’s played by plugging the output into the inputs.  This technique was developed by Toshimaru Nakamura, and transforms a mixer into an instrument, resulting in what can be beautiful sculpted feedback.

Similar to this, no-input live coding is where no synthesis or pattern generation is explicitly used, instead feedback loops are created in software, and manipulated with DSP algorithms.  The result is a resonating structure that is its own unruly kind of audio synthesis.

Claude Heiland-Allen has such a system which he calls clive:

clive is a C audio live-coding skeleton for (re)writing JACK DSP loops on the fly, with auto git-commit / compile / load / run on each edited file save; and colourised display of gcc output and git diffs.  Some example audio recordings (with history in the git repository) are at:
http://archive.org/details/ClaudiusMaximus_-_Live_At_The_Schip_2012-02-18
http://archive.org/details/ClaudiusMaximus_-_Live_At_A34_2012-02-17

Great to see use of the venerable gcc in performance!

Network bands are also exploring no-input live coding.  The Birmingham Ensemble for Electroacoustic Research (BEER) wrote about their techniques for the International Conference on Live Interfaces.  Basically they create a feedback network between the performers, and intervene to create the performance by live coding with SuperCollider.

Perhaps the reason that the results of these experiments are so rich, is the relation to physical modelling synthesis.  A simple feedback loop with DSP processing is known as Karplus-Strong synthesis, a simple way of emulating (and therefore synthesising) a stringed instrument with astonishingly good results.  Connect such feedback loops together and you get waveguide synthesis, an excellent way to emulate a vibrating surface.

So perhaps by taking the abstract, no-input route, these artists are somehow getting closer to physical sounds!

UPDATE: Claude has sent a screenshot of Clive in action, and has also let me know that it is possible, but slightly dangerous, for Clive to take input.