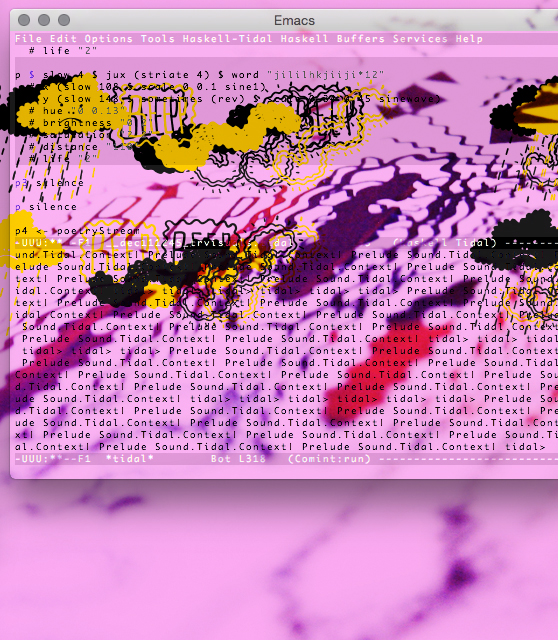 ‘s2hs2’ is an interconnection for sharing OSC data between @tidalcycles and @ProcessingOrg.  A visual form can be assigned to each letter on the computer keyboard, later is possible to live code such letters, modifying their behavior trough Tidal. The focus of the previously mentioned interconnection is to live code visuals, through poetic doing, so the complete project documentation has been shared by onfcopoe. ‘s2hs2’ was written by Alex McLean and Rodrigo Velasco in January 2015 in the ICSRiM of the School of Music at the University of Leeds. ‘s2hs2’ is part of the current Rodrigo’s research at Posgrado en Artes y Diseño of Universidad Nacional Autónoma de México.

To share an exploration and code, we find refreshing, engaging strokes and paper, on that ground Ollinca Torres made 10 amazing illustrations, which later engage in ‘s2hs2’ to generate the visual part of the current tristeTren set,  plus we got to capture some moments and experiment with them in paper, playing with inks, so we printed 2 different limited edition prints, ‘mitosis’ and ’88’, that we want to share with you.