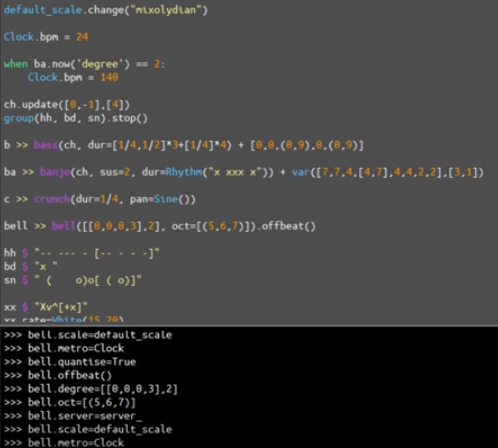 I’ve been working on this for some time and feel like it’s about time to let FoxDot loose on the world. Python is a user-friendly and (almost) human-readable programming language that is highly flexible and, in my opinion, beautiful and I wanted to live code this way. FoxDot is a Python package that comes with its own scrapped-together IDE and plays music by accessing any SynthDefs stored on a local SuperCollider server with some custom bits of syntax to boot. It’s still in early development but getting it out in the public domain means that some feedback might trickle back in my direction and I can push FoxDot forward. I’m doing a presentation/discussion/workshop about my system on Thurs, March 3rd at the University of Leeds’ School of Music 12-1pm if anyone is interested or would like to give feedback – good or bad!

The general philosophy of FoxDot is to create “player” objects as simply as possible that take keyword arguments that mirror the SuperCollider Pbind-SynthDef relationship and schedule their actions on a globally accessible clock. The long term plan is to get these player objects to interact with each other depending on their state, but like I said, it’s still early days. My youtube channel’s most recent videos are pretty much a chronology of updates of the application since its conception and I’ve started working on a google site to begin publishing the documentation and promote the GitHub page. See below for links!

4 thoughts on “FoxDot – Live Coding with Python and SuperCollider”